Keolis operates public transport networks on behalf of three hundred transport authorities around the world. It is now present in 16 countries across four continents

Since 1996 Keolis has operated some of the UK’s busiest rail franchises, as part of joint venture agreements, in addition it operates the urban light rail network in Nottingham and has now secured the Wales and Boarders franchise.

Govia is a joint venture between Keolis (35 per cent) and Go-Ahead Group (65 per cent). The brand operates three major commuter rail franchises and handles 390 million UK passenger journeys every year.

As the country’s busiest rail operator, Govia is responsible for 5,500 services, operates a fleet of 841 trains, serves 484 stations and introduced more new trains into service than any other operator since the UK’s rail network was privatised. The business has integrated the Gatwick Express into the Southern franchise and brought together three separate businesses under the London Midland brand.

Covers the southeast of England, including Kent and parts of East Sussex, as well as the south eastern suburbs of London. The network was redesigned and enhanced in December 2009 with the full introduction of HS1.

Since its launch in 2009 the service has grown every year, taking passenger journeys to 640,000 every weekday. Keolis operates Southeastern as part of the Govia partnership. 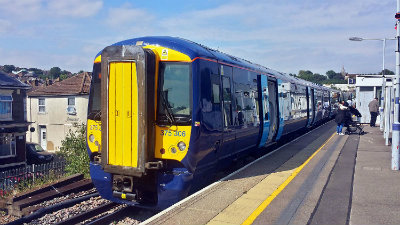 GTR, which stands for Govia Thameslink Railway, is the largest train operating company in the UK and was created following the merger of Great Northern, Thameslink, Southern and Gatwick Express in July 2015.

GTR now carries more passengers, people and trains than any other franchise in the country with over 300 million passenger journeys each year across 725 miles of network. In addition, the franchise operates 558 trains, manages 234 train stations and employs just over seven thousand people. GTR is part of Govia.

Keolis is part of the Tramlink consortium responsible for the operation, maintenance and ongoing expansion of the Nottingham tram system. In December 2011, Tramlink entered into a PPP (Public-Private Partnership) agreement for 22 and a half years. Together Keolis, Trent Barton, Alstom and Vinci, are the industrial shareholders in the Tramlink Nottingham concession company.

The network has undergone a major expansion programme opening two new lines in August 2015, which saw the addition of an extra 10.8 miles of track and new vehicles, taking the total fleet to more than twenty trams. This project was designed, financed and built by the consortium working in partnership. Operation and maintenance is undertaken by Nottingham Trams, a subsidiary of Keolis (80 per cent) and Trent Barton (20 per cent).