The Rail Accident Investigation Branch (RAIB) independently investigates accidents to improve railway safety, and inform the industry and the public 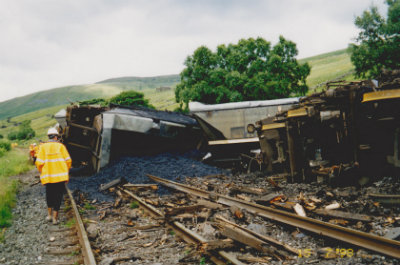 Lord Cullen’s inquiry report on the Ladbroke Grove rail accident in 1999 recommended the creation of an organisation to independently investigate railway accidents to improve safety. RAIB became operational in October 2005 as the independent body for investigating accidents and incidents on mainline railways, metros, tramways and heritage railways throughout the UK.

RAIB employs inspectors and principal inspectors with either a professional railway or investigation background and gives them extensive training in railway operations, railway engineering and investigating. Including the inspectors and the team who provide essential business support, RAIB has a total staff of 43 people.

Investigations are focused solely on improving safety. RAIB are not a prosecuting body and do not apportion blame or liability. Possible breaches of legislation are dealt with by other organisations, usually the police and safety authorities.

Whenever RAIB investigates, it publishes the results as an investigation report. RAIB also produces safety digests that highlight learning points which have emerged from the preliminary examination of an event.

RAIB investigates accidents and incidents which occur on the UK main line networks (Network Rail and Northern Ireland Railways), London Underground, other metro systems, tramways, heritage railways and the UK part of the Channel Tunnel. Operators of these types of railway and tramway have a duty under the law to notify RAIB of some types of accidents and incidents.

RAIB monitors operations on the major networks through various industry reporting systems and has the legal power and discretion to decide to investigate any event that occurs on a system that is within its scope, not just those that it is notified of as a requirement.

Some events on the main line railways that result in death or serious injury will not be investigated by RAIB (and in some cases they do not have to be notified to RAIB). There are two main reasons why this may happen. In many cases, from the information available at the time, it appears that the person concerned has deliberately trespassed or otherwise put themselves in harm’s way. If RAIB is satisfied, after making enquiries, that although an accidental sequence of events has resulted in tragic consequences, there are no safety lessons to be learned, RAIB will not investigate further.

As it is based in operational centres in Derby and Farnborough, RAIB is able to respond quickly to accidents in any part of the UK.