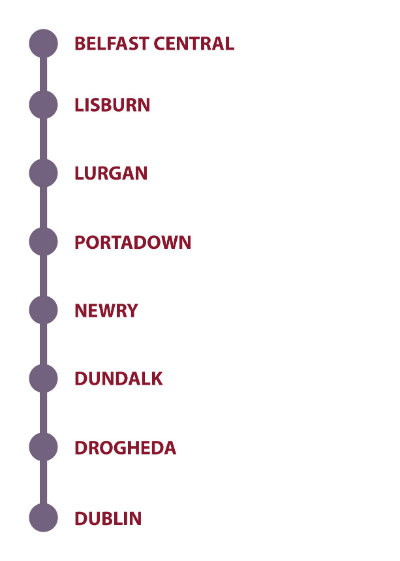 The Great Northern Railway (Ireland) (GNR(I)) introduced the service as the ‘Enterprise Express’ in August 1947 in an attempt to compete with air travel which was challenging the railways as Swissair and Pan Am both began using Shannon Airport as a stop-off on transatlantic flights in the Spring of that year.

The initial service ran between Belfast Great Victoria Street station and Dublin Amiens Street station, which was renamed Dublin Connolly in 1966. Customs checks were limited to the Belfast and Dublin terminals to reduce journey times by ensuring that journeys were non-stop.

In October 1950 the service was extended beyond Dublin to Cork. This proved unsuccessful and ceased in September 1953 when the governments of the Republic of Ireland and Northern Ireland nationalised the GNR as the Great Northern Railway Board (GNRB). In October 1958 the GNRB was dissolved and its assets and liabilities were split between Córas Iompair Éireann (CIÉ) and the Ulster Transport Authority (UTA) – the predecessors of Iarnród Éireann (IÉ) and Northern Ireland Railways (NIR) respectively. Following the completion of the Belfast Central Line Project, the Belfast terminal moved to Belfast Central station in 1976.

The service was upgraded in September 1997 with a new timetable and new coaching stock from French train makers De Dietrich Ferroviaire (now Alstom DDF). At this point the service, which had operated under either the IÉ or NIR brands, was branded separately as Enterprise.

The service has suffered disruption, particularly during the Troubles, when it was regularly halted by bomb threats. Since the Northern Ireland peace process, however, such disruption has diminished. Renewed investment in recent years has seen the line upgraded to continuously welded track capable of ninety mph running along the southern part of the route, as part of Iarnród Éireann’s rail network upgrades. The Northern Ireland section of the line was also upgraded to run at speeds of ninety mph on many sections of the line.

The Enterprise brand aims to be politically neutral, there are no Irish Rail or NI Railways logos inside or outside the train, only Enterprise specific branding, all announcements are made in English and not in Irish, and purchases are dual priced in Pounds Sterling as well as in Euros.

If an Enterprise set is unavailable, either a NIR or an IÉ set can be used. Both NIR and IÉ have equipped a number of their DMUs to each other’s specifications so they may be used in the event of a breakdown.

The three initiatives laid out in the plan are:

The long-term goal of electrification set out in the plan recommends replacing the existing rolling stock with electrically powered units by 2035. A new fleet of nine train sets would be required to permit an hourly service.