The final piece of Crossrail track was laid in September 2017, setting the stage for the Elizabeth line to open in autumn 2019

Renamed and rebranded as the Elizabeth line in 2016, the first new Class 345 trains entered passenger service in June 2017 between Liverpool Street and Shenfield. But that was only phase one.

The trains will be rolled out over five phases, phase two saw TfL running trains from Heathrow and Hayes & Harlington to Paddington in May 2018 in anticipation of the actual opening of the Elizabeth line – which is phase three.

When the central section opens trains will run from Paddington to Abbey Wood before full through service, including journeys to Reading and Heathrow Terminal 5 launching as soon as possible after this.

When it reaches full service, the Elizabeth line will be over 60 miles long, linking Reading in the west to Shenfield and Abbey Wood in the east.

Ten new stations are being built to complement the 31 existing stations that have been redeveloped to allow for the increased traffic the new line will bring. New stations have been built at Paddington, Tottenham Court Road, Whitechapel and Canary Wharf amongst others. The line is split between above ground and underground tracks, with 13 miles of twinbore tunnels having been dug under London. The existing Network Rail stations in outer London, Berkshire and Essex will have been upgraded and connected to the newly built tracks.

In total, there are fifteen existing London Underground, London Overground and DLR stations that will be serviced by the Elizabeth line.

Lifts will also have been installed at every Elizabeth line station to ensure step-free access from the street all the way to the platform.

The enhancements to the older stations have included improving accessibility at the ticket office windows and wider entrances to ticket halls.

The new trains are 200 metres long and can carry up to 1,500 people. The trains will use up 30 per cent less energy by tapping into the electricity produced whilst braking and then pumping that back into the power supply, just like a Formula One car.

The trains have three double doors per side which open onto a clear area which allows for easier access to the metro-style and bay seating within.

Other features include multiple wheelchair dedicated areas and mixed-use seating that can be flipped up to accommodate wheelchairs.

Manufactured by Bombardier Transportation, the Elizabeth line will operate seventy of the EMUs (electric multiple units) and carry half a million people across London every single day.

The Elizabeth line will be fully integrated into the existing London transport network, reducing travel times across the board. Londoners will see their commuting times tumble as Canary Warf to Liverpool Street, a trip which used to take 21 minutes, will take just six minutes.

Other journeys like Paddington from Tottenham Court Road will take just four minutes, compared to twenty minutes currently. British companies won 96 per cent of the contracts for the project.

The project proved popular as throughout 2017 announcements were pouring in concerning longer routes, extensions to Heathrow Terminal 5 and that there would be extra trains running more frequently than originally stated.

Initially 66 trains had been purchased to service the network but as expansions became likely that number was increased to seventy, allowing for trains every three minutes at peak times and the number of trains running from Paddington to Reading increasing from three every hour to four.

The Elizabeth line, which was originally called Crossrail, is managed by TfL.

Crossrail Limited constructed the new railway and the project was jointly sponsored by the Department for Transport and TfL. 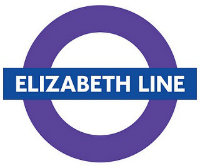