Launched in April 2016 and continuing until at least 2023, the TPE franchise is managed by FirstGroup.

The TPE network is:

• South TransPennine from Cleethorpes via Doncaster and Sheffield to Manchester Airport

In July 2018, TPE completed a £32 million overhaul of its existing Class 185 fleet working with manufacturing company Siemens and train owner Eversholt Rail to create a special and enhanced experience for customers.

The modern trains have been completely transformed to like-new standards including brand new seats with leather in first class and practical benefits such as plug and USB ports at every pair of seats, bigger tables with more space for laptops and LED lighting.

Customers are also benefitting from fast, free Wi-Fi in both first and standard class which is now available on all TPE trains.

TPE has now launched its complimentary onboard entertainment service across all routes.

The service, named Exstream, gives customers access to more than 150 shows and films and also features the latest news plus popular magazine titles.

As part of their commitment to local communities, TPE continues to work with local suppliers and businesses across its network, where possible.

Yorkshire based Camira Fabrics have produced the Standard Class seat covers as part of the £32million Class 185 upgrade while Petards in Gateshead supplied the on-board CCTV system. For those in need of a snack while travelling, customers can also enjoy some seasonal, locally sourced products as part of TPE’s onboard catering offer.

Nova – the countdown is on

TPE is delivering a £500 million investment in three brand new fleets of Nova trains over the next two years which will completely transform the travelling experience for customers. The company is receiving 220 new carriages in total meaning 13 million extra seats for customers once the futuristic new trains are in service.

The first of TPE’s new trains are set to be introduced over the next 12 months. 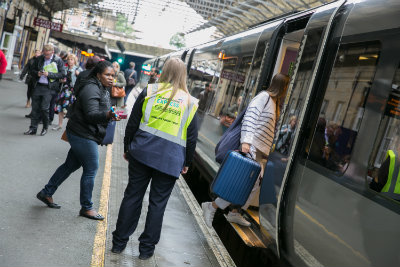