Each year the London Underground carries over one billion people across the nation’s capital, the same number as the United Kingdom’s National Rail network.

The network is just under 250 miles in total length, with just over one station for every mile track there are eleven lines serviced by 270 stations. Opened in 1863, the first journey was on what is today the Circle, Hammersmith & City, and Metropolitan lines from Paddington (Bishop’s Road) to Farringdon Street.

For the first one hundred years the Underground, nicknamed the Tube, was funded by private companies, the current operator, London Underground, is a wholly own subsidiary of Transport for London (TfL). 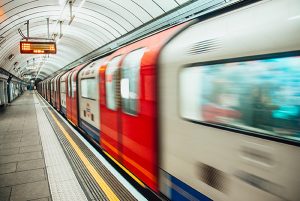 Trend setting
In the 1860s only basic signage – the station name and exit – was provided, in 1892 the first rail map was shown at stations on the District Line with the first free map being distributed to the public in 1908. That same year the world-famous roundel, the red circle logo featured at every station and all the Underground signage, first appeared.

The London Underground made several advancements throughout the 19th Century, many of them coming before any other city in the world had even built its own underground line.

The first tunnel was opened in 1880 with the first deep level electric line coming ten years later in 1890. By 1884 there were over 800 trains running on the Inner Circle every day, less than ten years later the government had approved five more underground lines. Six different lines had been opened before the turn of the century.

The Oyster card was first introduced in 2002, other cities, like Hong Kong in 1997 with the Octopus card had brought in their own automatic touch ticketing cards. Others came later such as the SmartLink card in New York 2007 and the Opal card in Sydney which was expanded to include the city’s light rail in 2014.

Modern organisation
In order to keep up with the pace of growth London experienced at the turn of the new millennium, multiple changes were made to the Underground’s organisational structure and operating procedures.

The first change came with the creation of TfL in the summer of 2000. For four years the Underground was reorganised into a public-private partnership (PPP) where private infrastructure companies carried out upgrades and maintenance work on the system.

This arrangement was short lived however and in 2003 the London Underground became a subsidiary of TfL.Of the two private companies that had been working on the Underground as part of the PPP scheme, one went into administration in 2007 and TfL assumed control of the other in 2010.

Passenger fares account for 92 per cent of the current operational expenditure.

Global brand
The Underground is a world-famous brand, with ridership records broken almost every day during the 2012 London Olympics. The Tube carried athletes and spectators across the city during the sporting event and one year later was ranked as the most improved brand according to London’s Buzz rankings.

The classic aesthetic has been used unofficially for years, with various products like t-shirts adorned with the famous phrase ‘mid the gap’ embossed over the roundel sign and other fashion items incorporating the famous visuals.

Customer experience
On a working day, three million trips are taken using an Oyster card. Contactles bank cards are integrated with the same technology and so also allow passengers to travel seamlessly across the network.

TfL continues to improve and expand the Tube. A huge signalling upgrade is currently being undertaken on the District, Circle, Hammersmith & City and Metropolitan lines. The £5.4 billion project will increase capacity by forty per cent and make journeys quicker and more reliable. A new extension is also being built to the Northern line.

Mark Wild, Managing Director of London Underground, said ‘This work is part of our record investment in the Tube, which will see over forty per cent of the network radically improved with more frequent trains, quicker journeys and better reliability and the first major extension to the Tube network since the 1990s.’