Dubbed the UK’s own ‘Silicon Valley’, when it is completed in the mid-2020s the East West Rail link corridor will be one of the country’s most strategically important railways 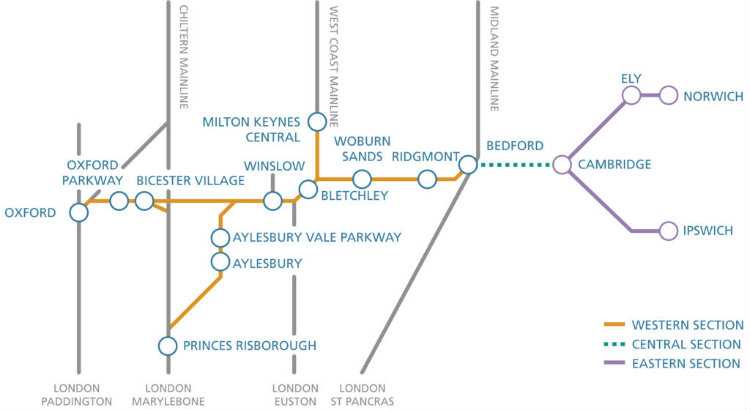 East West Rail is a scheme to re-establish a rail link between Cambridge and Oxford to improve rail services between East Anglia, Central and Southern England with enhanced connections to national mainline rail services.

It’s been nearly 50 years since the closure of the old Varsity Line and this railway has huge potential to spread prosperity all the way along the line with the restoration of the link between the two academic powerhouses.

When the line opens, it will have interchange stations with four main railway lines radiating out of London, but it will run under or over each, minimising any risk of delay. The aim is to build a route that allows future upgrades to be incorporated with as little disruption as possible.

The project is being promoted by the East West Rail Consortium – a group of local authorities and businesses formed in 1995 with an interest in improving access to and from East Anglia and the Milton Keynes South Midlands growth area.

The Consortium was established by Ipswich Borough Council who provided the chairman until 2005; a role now undertaken by Cambridgeshire County Council.

The Western Section route is on existing lines between Bedford and Oxford, Milton Keynes and Aylesbury Vale. Oxford to Bicester Village has been significantly upgraded as Phase One of the overall East West Rail project.

A Joint Delivery Board of elected members from the eight local authorities through which the Western Section of East West Rail will pass was created in 2012.

The Central Section of East West Rail will extend all the way out to Cambridge. As the line was closed in the 1960s many bridges have either been removed or are in a poor state of repair and the Bedford bypass severs the line.

The Consortium is now working with Network Rail to identify a single preferred route within a broad corridor from Bedford to Cambridge via Sandy, for train services through to East Anglia.

A Central Section Governance Board of elected members was established in 2014 to represent the Consortium member authorities’ interests as work progressed to identify a preferred route.

The railway east of Cambridge is extensively used by freight as well as providing passenger services. There were no direct passenger trains between Cambridge and Norwich until September 2002. In December 2004, the train operator, ONE, introduced an hourly service from Ipswich to Cambridge.

The railway for East West Rail services east of Cambridge to East Anglia and the east coast ports is also being reviewed. The East West Railway Company is a non-departmental public arm’s length body set up by the government to accelerate the East West Rail project.