We hear a lot about the numbers associated with the landmark HS2 project, whether they be related to the miles of track, depth of the tunnels, multi-million-pound regeneration programmes, or years until completion

‘What made that [litre] total more remarkable’ says Terry Beasley, Managing Director at T&M, ‘Was that we’ve been delivering more diesel than water to the Birmingham end of the project, while London had been consuming more of the water.’

As we’re talking about numbers, today, 70 per cent of T&M’s entire fleet of 110 vehicles is working on railway projects and over 90 per cent of them are on HS2, with
the remainder fulfilling commitments to Crossrail. In fact, such is demand from both the Birmingham and London phases of the project, Beasley recently signed off on the manufacture of 50 additional four-by-four, 10,000-litre vehicles. And with one single project presenting so much long-term work, further expansion is likely – it might even be necessary.

‘We’ve got about the same amount of four-by-fours at each site’ continues Beasley, ‘There’s more machinery in the midlands, which is the longer, larger part of the project as we see it, hence the greater demand for diesel, generally. But water is in constant demand throughout.’

T&M’s fleet includes its four-by-four, 10,000-litre and 30,000-litre capacity trucks that are widely utilised for bulk water supply to the railway sector. A lot goes into laying track, and, at each stage, a variety of plant and vehicles are required to keep the job moving. Wherever the equipment goes, the requirement for water—and fuel— remains essential.

Beasley says: ‘(HS2) is a legacy project that everyone wants to be part of. Our customers on the north (Balfour Beatty VINCI) and south (Skanska Costain Strabag, SCS JV) recognise that timely delivery of water and fuel is fundamental to success. Without constant access to water and fuel, major rail projects would shudder to a halt.’

Of course, HS2 doesn’t represent a foray into rail for T&M, but more an increased commitment to the sector. T&M has been serving the rail construction industry since inauguration more than three decades ago. Over that time, while the ambition of railway projects has changed, the major task of getting to plant and vehicles, often in remote, rural, locations has remained the same. There’s a simplicity to that requirement, yet it poses great logistical challenges. Ensuring bowsers have the right fuel attachments for this unique sector’s trains and plant is just the starting point.

‘We can get water where most people can’t’ Beasley says. ‘Often it comes down to our ability to adapt; we’ll make a vehicle do what the customer wants it to. Over the years, we’ve built up a reputation for delivery. Of course, without it, we wouldn’t continue to get contracts. It helps that the same companies are involved across our customer base – road, air, rail, construction
and ground investigation – but that only works in your favour if you become reputed for delivery of the solution that they need.

Before commencement of HS2, only 25 per cent of T&M’s fleet was engaged on rail projects. This summer marks six years of supplying bowsers for the Crossrail project, which is delivering the Elizabeth line to provide a 10 per cent increase in rail capacity in central London. ‘Crossrail is interesting’ says Beasley, ‘Because it’s been such a long running project; they come in all shapes and sizes in this industry.’ 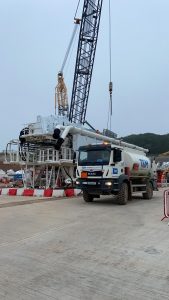 Beasley was enthused by news that, during London Climate Action Week, which took place 26 June to 4 July 2021, HS2 announced a pioneering project to use
hydrotreated vegetable oil (HVO) fuel for the first time in the UK in a piling rig on a HS2 site in the capital city. SCS JV, through Cementation Skanska, undertook a three-week trial to find more eco friendly fuels to use on construction sites for piling activities. HS2 is committed to reducing carbon emissions in construction and has challenged all its contractors to reduce emissions by 50 per cent against construction baselines.

T&M is ahead of the curve, having delivered HVO fuel to the point of use for Skanska on several major projects, as the UK contractor revealed plans to HVO-power all its site-based plant and equipment to become carbon net-zero by 2045. T&M will follow its lead in due course. Skanska has utilized the high-performance fuel Green D+, from Green Biofuels Ltd., as a diesel substitute that generates a 90 per cent saving in CO2 emissions. Skanska monitored the difference between fuels by utilising Green Biofuels’ smart tank system that maps and controls energy usage on site. However, the green benefits are already universally accepted by an industry at the dawn of a new era.

Beasley says: ‘We have been getting approvals from our vehicle manufacturers (to use HVO) while maintaining existing warranties. We have also been talking to other companies that are using it already and there seems to be the opinion that it is not suitable for older vehicles, say, Euro 3, 4 and 5. But as 95 per cent of our vehicles are Euro 6, we are in a better position than others to make this switch. Practically, you can run on HVO this week and diesel next week, if the vehicle is relatively new, so the barrier to entry is low. It’ll be interesting to see where the HS2-HVO journey goes. Everyone needs to buy a ticket.’