The Museum at Covent Garden is not only a great day out but the base for the educational and heritage charity’s learning programmes across every London borough, the Acton Depot collections centre, road and rail heritage operations and Hidden London tours of disused Tube stations. These activities contribute 80 per cent of LTM’s budget from self-generated income, building on the foundation of an annual grant from parent company Transport for London (TfL). With LTM’s operations closed down or limited by Covid restrictions and our parent company TfL on sporadic
and grudging financial life support from government, the past two years have proved to be an existential challenge.

Our recovery strategy was to make the best of the hand we held to convince supporters and funders to stick with us. During the initial lockdown, our educational programmes to schools promoting safety and citizenship were switched to digital delivery, our Hidden London tours went virtual and online, we developed fresh content for our YouTube channel and website and saw business in our web shop develop very fast. Digital activity demanded new skills but enabled us to fly the flag from the Museum while most were working from home.

Planning for reopening was a welcome distraction during three lockdowns. We recognised that our visitors would be keen to return to real experiences and that while the Museum itself would need to be visibly sanitised, that experience would need to be normal, and above all fresh and engaging. We were determined to bounce back better; the London’s Transport at War gallery was rebuilt for the September 2020 reopening, while the popular Hidden London exhibition was extended.

For 2022, a major documentary and collecting project, Legacies: London Transport’s Caribbean Workforce, has been realised in an exhibition that opened in February. This has been an opportunity to revisit the histories of the men and women who were recruited directly from the Caribbean to keep the Capital moving in the 1950s and 60s.

In 1948, Britain had granted the status of British Subject to citizens of the UK and Colonies. Britain benefited greatly from those making the difficult 7,000-kilometres journey to London, which had started with the docking of the HMT Empire Windrush at Tilbury in 1948. The former deep shelter at Clapham South had become a short-lived hostel after the war, and over two hundred of the men on the Windrush were accommodated temporarily for a week or two while they secured jobs and homes.

From 1956 to 1970 LT recruited about 6,000 employees directly from the Caribbean to the UK. The experiences of new recruits are explored in a re-edited short film by Jefferson Bannis called Arrival which revisits interviews with direct recruits from the Caribbean shot for the Museum in 1994, along with some of the original advertising posters created to drum up interest for vacancies back in London.

London Transport had found it increasingly difficult since the war to recruit operational staff; recruitment in Ireland and Malta had not filled the gap. So, in 1956, Charles Gomm was despatched to Barbados to recruit men and women as drivers, conductors and canteen staff, at the invitation of the Barbadian government. Many new recruits answered the call to help the ‘mother country’ and found themselves translated from sunshine and limited job opportunities in the Caribbean to regular work in the cold and wet of 1950s London.

The new Caribbean recruits arrived with high hopes of life in Britain but were shocked to be faced with hostility and racism and struggled to find places to live. The voices of early Caribbean arrivals are captured in evocative quotes that form part of the display; Ruel Moseley, a bus conductor recruited from Barbados in 1959, recalls: ‘You were not used to sharing five to a room. However poor you were in Barbados you were not used to sharing a room… I cried like a baby the first week I was here.’

New recruits worked as bus conductors, station staff and canteen assistants and in track maintenance and building work. Though most were skilled and well-educated, they were obliged to take basic, low-paid work and often found promotion difficult due to pervasive racism. Homesickness and the cold weather also made the lives of new arrivals difficult. Yet despite these great challenges, many enjoyed their work and thrived. New social and sports clubs were set up, such as the London Transport Caribbean Association, which helped with everything from holidays to assistance with funerals in the Caribbean.

A new short film entitled Bite your tongue by Comfort Adeneye and Emmanuel Adeneye, 2022, commissioned by London Transport Museum, draws upon a real account of passenger hostility experienced by a Caribbean recruit working for London Transport. Framed as a conversation between two colleagues, it highlights the challenges of adjusting to a new city on the job and the expectation of self-restraint dealing with passengers.

Most of the initial Caribbean recruits were men, but women also took up jobs at LT, especially in the numerous canteens that in 1956 helped to feed 87,000 staff. Historical images of Caribbean women working in the canteens illustrate life in these staff restaurants and a Syllabus of Training for Cooks manual shows a typical day, with its mix of lectures and practical work. These new cooks soon introduced new Caribbean flavours and recipes to the traditional British food. 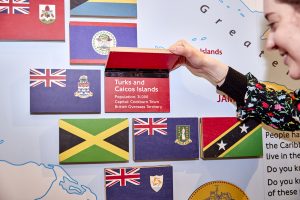 Such an important story with such influence on London demanded an approach that gave a formative voice to the lived experience of three generations of Londoners with a Caribbean background.
An Advisory Board with Caribbean heritage was recruited, many of whom work for TfL, to open up collaboration with a range of communities across London. The Advisory Board also advised exhibition curators on the narrative, object selection, language and tone, and design, as well as the wider Museum team on promotion of the exhibition, events and the development of sessions for schools. Members loaned heirlooms and photographs, and contributed new oral histories to the exhibition. The enthusiasm, ideas and feedback of the Advisory Board members were vital to the
project – it would not have been possible or credible without them.

The Museum also worked with Museum and, The National Caribbean Heritage Museum, for advice on language and culture and the TfL Raising Awareness of Culture and Ethnicity (RACE) Staff Network Group, who generously shared their resources and expertise. Up-and-coming filmmakers were commissioned to create new short films for the exhibition and Hannah Stevens, our Khadija Saye Photography Fellow, was commissioned to take portrait photographs of the new oral history interviewees.

LTM’s mission is to inspire curiosity in how London has been and continues to be shaped by its transport network. We take this to mean not only innovations in vehicles and services, but also the social and economic impact of mobility on the Capital. The direct recruitment from the Caribbean from 1956 to 1970 kept the Capital moving and brought new food, great music and Carnival to London.

We saw the benefits of this new approach brilliantly demonstrated at the exhibition preview. The many groups and individuals who had created the exhibition with us were invited and they brought friends and parents to celebrate their story. I have never seen such a diverse party for an opening, with Caribbean food, a steel band and a great playlist. As our guests streamed into the exhibition, I overheard someone say; ‘who would have thought twenty years ago we would see our story up in this Museum’. We are very proud to have been trusted with telling this history and that our collaborators see it as their story.

There are still so many stories yet to be told, and as the exhibition is open for more than two years, we look forward to adding new material over time. We’re also building on our work with the Advisory Board and deepening our relations with Caribbean communities and TfL colleagues.

Sam Mullins OBE is a historian with a passion for museums, their narratives and their potential as spaces for education, engagement and entertainment. Since witnessing the last days of steam in 1960s Salisbury, he has led the creation and development of museums in Shropshire, Leicestershire and St Albans. As director of London Transport Museum (LTM) since 1994, Sam has led the continuous development of the world’s leading museum of urban transport, for which he was honoured in 2019.