Anchor Systems (International) Ltd were called in to help with a large project as part of the South Alton Masterplan in Hampshire. The Butts Bridge Scheme included road, railway and bridge
improvements required to facilitate the delivery of essential new housing in Alton. This included the replacement of Butts Bridge which carries the Mid Hants Railway, known as the Watercress Line, over the A339. The original Victorian brick arched railway bridge was demolished and replaced with a new wide span steel bridge to allow the road to be widened, removing a notorious traffic bottleneck.

The replacement bridge, which was designed by Jubb Consulting Engineers Ltd, incorporated steep sloped embankments on the approaches to the abutments which needed to be reinforced and stabilised. 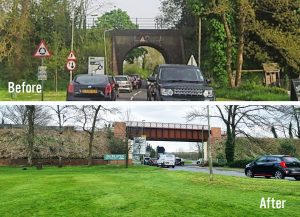 Contractor Knights Brown approached Anchor Systems for advice to determine the correct anchor to meet the load requirements specified, while also meeting a 120 year design life. To ensure the factor of safety was within acceptable limits over the long term, geotechnical engineers specified a system of mechanical ground anchors combined with a suitable geotextile covering. It was determined that 120 no. Vulcan AS-30 316 stainless steel anchor systems would be suitable. These were fitted with 4m of 12mm stainless steel tendon installed to a depth of 4m, with the specified
Greenax revegetation and erosion control mesh placed over the slope. This was then held in place with Vulcan AS-10 stainless steel anchors driven through the integral steel mesh.

Mechanical ground anchors, such as Anchor Systems’ Vulcan range, are routinely used to stabilise slopes, either in made ground like railway and bridge embankments or in natural ground in cuttings or in foundation excavations.

Site restrictions meant that part of the installation works, carried out by Hartmann Construction for Anchor Systems, had to be achieved using a handheld hydraulic breaker operated from an access platform. The simple installation process meant high production rates were achieved by a two-person team. The anchors were then proof loaded to the specified 10kN and locked off
at 6kN using a battery powered pump and hollow hydraulic cylinder.

Full and final testing deemed the design was within the agreed safety limits and the project was concluded successfully. Once the entire scheme was completed, the Flying Scotsman marked the official re-opening of the bridge.

The Vulcan Earth Anchor range was designed by Anchor Systems (International) Ltd as a simple, reliable and cost-effective ground anchoring solution with the ability to provide immediate loading capacities from 1 – 450kN, in displaceable ground conditions and can be used in an extensive range of applications. The concept involves a specially designed earth anchor with a larger surface area, attached to high yield tie bars or tendons to suit a variety of conditions, being driven into the ground where it is locked in position. The tensile load is applied, and the exposed end locked off and terminated. With their ease of use and speed of installation, Vulcan Earth Anchors provide a time and cost saving alternative to more traditional means of anchoring, particularly where tight programme schedules are involved. This, combined with the wide range of sizes available means that the Vulcan Earth Anchor has gained recognition across a vast array of applications internationally. Anchor Systems believes it is the only manufacturer which can provide complete stainless steel anchors and claims to have the largest range of anchors in the world. 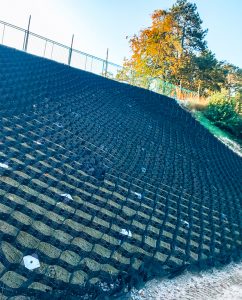 ‘The bridge to be replaced sat close to a second bridge structure on the same track which was to be retained and this interface complicated the scheme design. Connecting these two structures was a curved façade retaining wall supporting the railway embankment on the south side and this also needed replacement as part of the scheme. This was made difficult by the presence of a public sewer at depth beneath the wall and also the adjacent bridge structure which necessitated a creative ground engineering solution to avoid deep foundations. ‘Existing land take was limited leading to the need for a steep (45 degrees) north facing embankment adjacent to Butts Green between the new and retained bridges. Global stability analysis was undertaken using Plaxis which determined the need to re-construct the embankment using imported Class 6I structural fi ll material reinforced with a 5.5-metre long geogrid at 0.9-metre horizontal spacing. Geocell facing material was used over the slope face in order to control surface erosion and aid the re-establishment of vegetation. ‘Due to the sensitivity of the existingbridge being retained, we were keen to minimise excavation of the North facing embankment slope to maintain as much support to the existing abutment as possible. Th is created an interface between the retained, in situ, embankment and the newly imported Class 6I fi ll which had to be treated. We had concerns over the integrity of the retained slope so chose to stabilise this as part of the works using driven dead man anchors to provide additional support. A reinforced wire netting was used to transfer the anchor forces into the slope and the geo-cell facing used across the entire embankment slope area to establish a
uniform and stable slope’

‘We were able to install 120no. AS-30 Vulcan earth anchors with a two-man team over a two working week period, using a combination of 8t excavator and handheld equipment. The handheld was used where we couldn’t reach with the excavator with the use of handheld installation and loading plant. A cherry picker was used to allow access to each anchor location for installation via hydraulic breaker and loading/setting of anchor via a hydraulic ram and calibrated test gauge to the designed load of 10kN (locked off at 6kN). A mechanical earth anchor system eradicated the need for any wet trades and curing times meaning the anchors were instantly active. Handheld equipment reduced the requirement for any heavy machinery/plant needed on site which helped with limited space on site as well as environmental factors such as transporting large plant.’ 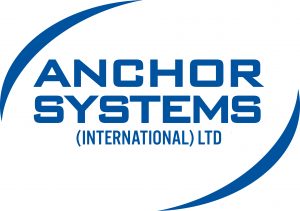