The successful opening of the Northern Line extension to Battersea Power Station is testament to the growing capabilities of digital design, writes Justin Phillips, Director at Buro Happold

The recent completion of a £1.2 billion extension of the London Underground’s Northern Line will unlock one of the capital’s most ambitious regeneration projects for decades – the redevelopment of Battersea Power Station. This eight phase, £9 billion project will see the 42-acre former industrial site transformed into a highly anticipated mixed used development comprising apartments, bars, restaurants, offices, retail and leisure space.

The ongoing development and construction of the regeneration project was dependent on the timely delivery of the new twin tunnel railway line extension and two stations at Nine Elms and Battersea Power Station. It’s this rail project that provides the vital link to guarantee adequate transport infrastructure is in place, ready to unlock the potential of this vast new neighbourhood and connect it to the rest of the capital. 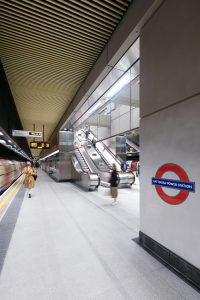 Opening day of the new Battersea Power Station, on the the Northern line extension (NLE) between Kennington and Battersea. Monday 20 September 2021.

As well as being part of the project to extend the Northern Line, Buro Happold completed the initial detailed design stage for the air rights developments over the Battersea underground station. This was a crucial component to ensure the integration of the station and the above ground commercial developments could safely proceed during the critical early phase of construction of the underground railway.

Tasked with creating the initial scheme designs for the new stations and the over station developments, the use of digital design tools proved to be essential in overcoming a range of complex challenges.

The project is a fantastic example of how digital modelling can really push the boundaries of design. The team was faced with an unusual situation where neither the station or the above ground developments had yet been built but would need to be structurally integrated and constructed at the same time. In most cases, a building would bridge across a station or have oversailing cantilevers in place so having the above ground structures in direct contact with the top of the station, where neither asset is already in place, added an additional level of complexity that only a fully integrated digital design could solve.

Digital design tools really came into their own in a number of ways. It allowed the critical station box lid to be optimised while retaining a reasonable degree of flexibility for future loading introduced by the air rights development. By adopting the optimal location for the heaviest over station building core loads, the team was able to ensure station operations were protected while maximising the layouts and aspects of the above apartments. In addition, it provided the highest level of certainty around respective station and building loadings, as well as their relative deflections. 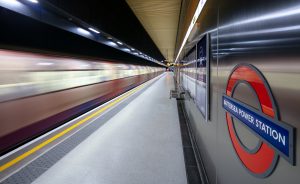 Opening day of the new Battersea Power Station, on the the Northern line extension (NLE) between Kennington and Battersea. Monday 20 September 2021.

Collaboration between the different project stakeholders was an essential part of the design journey. This was made even smoother through the use of digital modelling and similar Building Information Modelling (BIM) platforms, particularly as there were many partners throughout the project duration.

Transport for London’s appointment of new design and build contractors in 2015 led to significant changes to the planning design of the Battersea train station. Buro Happold worked closely with the station engineers, Mott Macdonald, and the station architect, Grimshaws, to accommodate design alterations that provided greater operational efficiency and rail user satisfaction. This included widening the station box, altering the position of the station entrances (including integrating one within the air rights development) as well as adopting elements of the temporary works construction within the finished building that required an early approval. In turn some alterations were also made to the internal layouts of the commercial and residential buildings above and in basements adjacent to the station, designed by the world leading architects Fosters + Partners and Frank Gehry.

Working within a digital environment, the team was able to work alongside the different project partners and visually demonstrate the interaction between the two projects and how different design changes could be accommodated without affecting how the stations operate or impact the quality and extent of prime real estate above. The ability to demonstrate these complex issues to stakeholders in a simple 3D or 4D environment helped to speed up wider approval processes and governance. The adaptability and resilience of the digital models also meant that these design changes could be embraced, without impacting the overall programme and that successful design divergence of both projects at differing states of maturity could be achieved without extra cost.

Close cooperation with the construction team within an integrated digital BIM environment ensured work on the station and development above could proceed in parallel while still accommodating structural changes. One such change arose with the need to deepen the basement next to the station to allow for greater provision of parking. With the soil removed from one side of the station, a solution was required to control the resulting deflection of the station wall. Using a visual model backed by a shared soil-structure interaction model, the team were able to show how the creation of a novel jacking system could be implemented to keep the wall in place and stay within the one-inch deflection limit, should the basement be built in future. 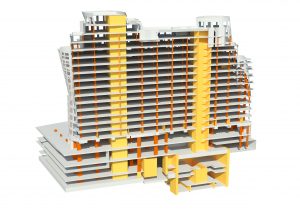 The use of digital modelling went beyond visualising interaction during the construction process to even consider future eventualities. With the apartment blocks situated above the station due to have 999-year leases, the project team was required to demonstrate to the client how it would be possible to undertake a complete rebuild of the underground station using current technologies without impacting the commercial and residential spaces above.

The project team created a visual representation to show how the extended headspace allowed for the retail spaces positioned directly above the station could be used to insert a series of temporary mega trusses. This would be capable of supporting the building load and deflections of the residential apartments above while allowing future residents to continue to occupy the building.

The structural integration of these two projects demonstrates the impressive capabilities of digital design not only in providing innovative design solutions but in fostering greater collaboration between project partners. This approach enables adaptability without impacting on programme, cost or construction workspace.

Happold Buro Happold is an international, integrated consultancy of engineers, consultants and advisers. Operating in 26 locations worldwide, with 72 partners and over 1,900 employees; for over 40 years we have built a world-class reputation for delivering creative, value led solutions for an ever[1]challenging world.

As a truly inter-connected community of experts, we value human wellbeing, curiosity, embrace mutual responsibility and genuinely care about the impact and legacy of our work.

Justin first joined Buro Happold in 1996. He has over 30 years of multidisciplinary engineering, design, consultancy and project management experience on numerous high[1]profile civil and structural projects in the UK and worldwide. Justin’s particular interest lies in mixed-use development and regeneration schemes in London. His other notable projects include Millennium Dome and the 2012 Olympic Stadium. Justin is a Chartered Civil Engineer and Fellow of the Institution of Civil Engineers.