We do get asked some unusual questions sometimes and last week was no exception. “Would The Polar Express run on the UK railway?” doubtful, was my response, but it got me thinking.

Through the eyes of a young boy the Polar Express appears an imposing leviathan but was it based upon a real train? If so, just how big was it? And would it run on the UK Railway Network?

A little background investigation and it transpires that the animated Polar Express was based upon the Locomotive PM 1225 built for the Pere Marquette Railway.

She first entered service in 1941 where during her short service life she was used to shuttle steel and freight between Detroit, Flint and Northern Indiana steel mills. In 1951, she was retired from service and sent to Michigan for scrapping. Escaping that fate, she was gifted to the Michigan State University where she remained as a static display for more than a decade. It was there that a young child used to stop and admire the locomotive with his father on the way to football.

That child was the author of The Polar Express, Chris Van Allsburg, who took inspiration from the engine and the birth of the Christmas day myth from its number 1225.

PM 1225 is now a preserved locomotive, operating excursions over the Great Lakes Central Railroad and winter excursions to Ashley, Michigan although due to copyright issues for these excursions she’s named as the North Pole Express.

So back to the original question, “Would The Polar Express run on the UK railway?”

Fortunately, she’s built to 1435mm standard gauge (4’ 8 ½”) so at least from a track perspective gauge compliant.

But as for her physical size the image below provides a comparison of her gauge profile compared to the UK PG1 Passenger Gauge. Undoubtedly there will be gauging clearance issues. Particularly against the wide footsteps fitted to the rear of the Tender unit. 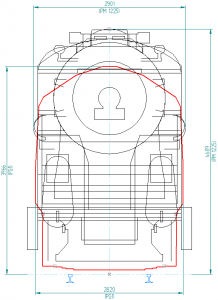 I’ve reviewed the 4 mainlines in the UK routes from London to see if any one route fares more favourably. 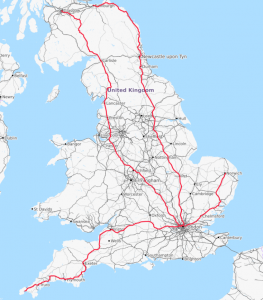 The Eastern route has the least problems and the East Coast is most favourable per route mile.

As suspected, the wide footstep at the rear of the tender is responsible for many of these tight clearance structures. With these removed, structures are dramatically reduced.

The horns and lights at the front of the PM 1225 account for many of the reported Fouls, which while these no doubt could be removed, other areas of the vehicle at roof level i.e. Smoke Stack, Cab Roof would require modification.

However, this is all semantics, after all as anyone who has seen the film knows the Polar Express is fuelled by Christmas magic and no limitations or restrictions on where it may travel. Gauging is irrelevant as the train can adapt to fit its environment. In much the same way that the Night Bus in Harry Potter and the Prisoner of Azkaban deceptively fits through small spaces.