Network Rail engineers are working through extreme weather to raise Black Bridge, near Machynlleth, by one metre to lift it out of the flood zone.

The £3.6m project – a railway first – will protect the bridge from high river levels and significantly reduce disruption for passengers.

Heavy rain at the end of May has caused the river levels to rise, hitting the closure mark of the bridge and demonstrating why the work to lift the bridge is so important. Despite this setback, work is progressing well.

The bridge deck has been lifted and secured into its temporary position. It will be held there until it is lowered on to its newly constructed bearings next week, which will be one metre higher and out of the flood zone. 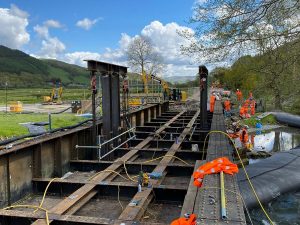 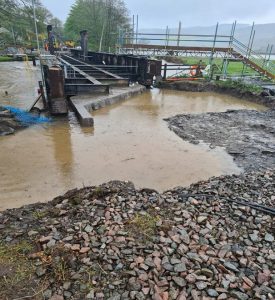 “The flooding we have seen at Black Bridge during our work shows exactly why raising the bridge is so important.

“We are putting passengers first by making the railway more resilient and reliable.”

The bridge is repeatedly flooded during periods of heavy rainfall, causing regular closures and disruption to passengers on the Machynlleth to Shrewsbury route.

The railway will be closed until 28 June so that the work to raise the bridge and reprofile the track can be carried out safely.

Transport for Wales are providing rail replacement services between Machynlleth and Shrewsbury. Please check the latest Government guidance before travelling.

The bridge goes over the River Dulas in Powys, which is a fish spawning river. This means there is a limited time period when Network Rail can carry out the resilience work. Network Rail is working in collaboration with Natural Resources Wales and ecological specialists, doing everything possible to protect the sensitive local environment.