Since its founding 1998, the specialist company has supplied concrete and segments to a large number of infrastructure projects and is involved in many projects. One of those projects is the Woodsmith Project – the construction of a 37 kilometres long Mineral Transport System for the world’s largest Polyhalite resource. Rapidly increasing and urbanized world populations require the use of fertiliser for more efficient food production. The mineral Polyhalite provides this by sustainable and low carbon means.

From the Woodsmith Mine, the mineral will be extracted via a mine shaft from 1,550 metres below ground and transported on the underground conveyor based Mineral Transport System (MTS) to the Materials Handling Facility in Teesside where it will be granulated. After being processed, the product will be transported to port via overland conveyor system and the majority will be exported to overseas markets. 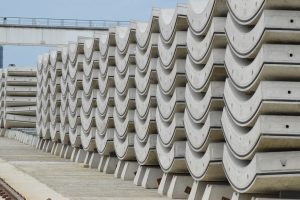 STRABAG, the parent company, was 2018 awarded with the design and construction of the 37 kilometre long tunnel, including the MTS. The total contract value amounts to several hundred million Euros with a one hundred per cent share for STRABAG. The scope of work comprises 300 metres of open cut, 100 metres SCL tunnel, 36.1 kilometre segmental lined tunnel boring machines (TBM) drive, underground caverns, a minerals transport conveyor belt system as well as tunnel utilities include 66 kV mine power and 900mm gauge maintenance railway system.

This is, where Mobil Baustoffe comes into play of this project, which is located in north-eastern England. Mobil Baustoffe is responsible for the concrete production for the high precision tunnel segments for the TBM driven tunnel. 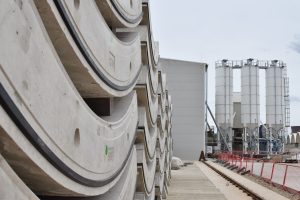 The segments are fabricated on site in a factory specially set up for the project, including the production of steel reinforcement cages and the concrete batched on site. The entire production line up was laid out for an equivalent of 20 metres per day of TBM advance. The anticipated productivity was achieved using local labour, many with no previous segment manufacturing experience after a learning curve of about three months. Despite a higher than expected rate of more than 17 rings per day or 26 metres of tunnel, the segment production was outpaced by the daily TBM advance rates of up to 52.65 metres. In order to mitigate shortages, additional segments have been supplied by Mobil Baustoffe from Ruegen/Germany between January and May of 2020.

The biggest challenges for this very long tunnel drive are especially the logistics. High safety standards and a tight time schedule, funding issues and contractual changes have resulted in additional challenges. Close cooperation with the client’s team on site has been key for achieving best results for the Project

Mobil Baustoffe operates worldwide. At the Ruegen facility Mobil Baustoffe also produced high precision segments for the Cityringen project in Copenhagen. Here Mobil Baustoffe successfully produced over 125,000 high-precision segments for about 30 kilometres of tunnel. To do so, the company installed a production yard within the confines of Sassnitz Ferry Port on the island of Rügen in Germany. Reinforcement cages and segments were produced in two separate sheds. The planned output of segments was exceeded by up to 35 per cent. The client shipped the finished segments via vessel to a storage yard in Copenhagen and eventually by truck to the respective sites along the tunnel line. 140,000 m³ of high-quality concrete was used to pour the 125,000 segments in a carousel system. Mobil Baustoffe’s concrete experts developed special concrete mix designs with a very low chloride ingress. The client had the optimal supply at any given time. Producing the segments in Germany had a valuable price advantage for the client. 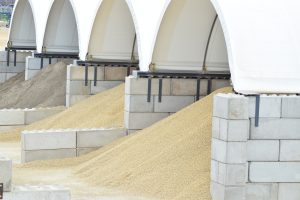 Switzerland, famous for its high mountains, is of course also one of the company’s operational locations. Mobil Baustoffe developed a concrete mixing plant for underground operation at the construction site of the Lötschberg base tunnel (Switzerland). This dual batching plant with two 2.25 m³ twin-shaft mixers was designed to fit the dimensions of the existing cavern.

A bunker silo for aggregate storage with a capacity of more than 2,000 m³ was used to achieve maximum reliability. Aggregates were supplied by a conveyor belt that transported the material directly via the access tunnel into the bunker silo. With this system, Mobil Baustoffe produced approximately 700,000 m³ of concrete under extremely challenging conditions to the full satisfaction of our client. Another smaller underground batching plant was used to produce concrete for the lot two of the Koralm tunnel in Austria.

Mobil Baustoffe is your partner of choice for any infrastructure project with a high concrete demand and is specialized in the reliable and cost-effective production of concrete on site for large scale construction projects around the world. The project related production of aggregates e.g. made from tunnel excavation material, the production of tunnel segments for TBM driven tunnels and the production of TBM backfill materials, as well as consulting are part of their services – for more than 20 years. To find out more get in touch with them using the contact information below.