Previous Next
HEX-IT: laying the foundations for a super-hub station

In 2020 Heathrow Express embarked on the final phase of its exit from the depot it had called home for over 20 years. This move paves the way for the transformation of Old Oak Common into the UK’s biggest ‘super-hub’ station

During the transition it was imperative for Heathrow Express to maintain its daily service while launching a new upgraded fleet maintained in Reading. The project was complex and involved many stakeholders. Here Sophie Chapman, business lead of Heathrow Express, explains how great teamwork and a collaborative approach made a smooth ‘HEX-it’ happen. Heathrow Express has known for at least six years that it would need to vacate the Old Oak Common depot to make way for the HS2 route.

What was once an industrial depot used for train maintenance will become a ‘super-hub’ connecting high speed rail services between the South West, Midlands, Scotland and the North with Central London and Heathrow. Initially, there were plans for Heathrow Express to build a new depot in Langley. But then as GWR’s Class 387s became available, the decision was made in 2018 to save money for the public purse and join forces with GWR to migrate to their Reading depot. This also presented an opportunity to retire the life-expired Class 332 trains.

We might be a 15-minute point-to-point service, but we are at the centre of the action when it comes to the next phase of boosting sustainable rail travel in the UK for a global Britain! We are also an important tool for Heathrow’s ambitions to ensure that 45 per cent of passengers reach the airport by public transport by 2026.

Space is always constrained in our metropolitan South East region and the deadlines were tight, so maintaining a business-as-usual service while managing a major project was always going to be a logistical challenge. Doing so during a pandemic, with extra health and safety measures to implement and unprecedented business pressures, added to the complexity. Andrew Darbyshire took on the challenge to lead the final operational phases of ‘HEXit’ as it started to become known.

He joined the business in March 2019 to work on maintaining service levels while Heathrow Express dropped down from two platforms to one at Paddington to enable the delivery of the enhanced December 2019 Western Route Timetable. Once this was delivered, he became our interim Head of Train Services, responsible for the transition from project to business as usual.

‘HEX-it’ required various stages to be aligned. We knew the final process would take several months to complete in terms of the removal and disposal of trains and handover to new ownership, but we also had to co-ordinate with colleagues readying the new Class 387 fleet, including GWR, Porter brook and Alstom (was Bombardier).

The Class 332 fleet, which had become synonymous with Heathrow Express, had reached the end of its life, but as the Department of Transport confirmed that the Heathrow Express service will run at least until 2028, the nearly new GWR 387s were perfectly placed to take their place after being carefully converted to meet the needs of airport customers. 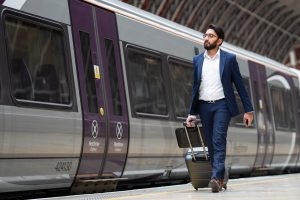 The upgraded fleet had to be fully operational and in service before we could decommission the Class 332 fleet. That meant keeping two fleets maintained at the same time, with two engineering teams, no gaps in service and access to Old Oak Common maintained. The collaborative relationship between Heathrow Express and Siemens Mobility was crucial to achieving this. The HS2 deadline was very clear and all the parties involved knew we couldn’t delay beyond end of February 2021. If we did, the HS2 programme could be put at risk, as they needed us out of the depot so that they could complete structural works. But we had carefully planned the process and had complete faith that our timetable was realistic and achievable.

Part of that plan included the launch of the new fleet by the end of 2020, with the biggest challenge being successfully operating the new European Train Control System (ETCS) signalling system. By the Christmas holidays, the up-cycled trains were launched and running two services an hour, as per our Covid-19 timetable.

From autumn onward a dedicated team of up to eight from Heathrow Express worked exceptionally closely with colleagues from Siemens on readying the depot for closure  and preparing the trains to go to their next destination. Right from the outset, co-operation on the ground between the different companies was excellent.

The working relationships between the teams from HS2, Network Rail, Siemens Mobility and Heathrow Express were always positive and collaborative, irrespective of the challenges that were presenting themselves in the background. HS2 contractors were provided with unfettered access to the site for surveying and planning; Network Rail teams were transparent and flexible in their plans for decommissioning vital railway infrastructure, enabling the HEx and Siemens teams to develop plans that provided a clear pathway on how to get the trains out of the depot.

It is a tribute to the professionalism of the teams at the depot that despite uncertainty around dates and constant changes to schedules, every change was calmly assessed and replanned and the resulting tasks delivered safely. The Heathrow Express project team also needed to maintain positive working relationships with the supply chain delivering the new fleet – GWR, Porterbrook and Alstom. It was vital that the Cl.387 fleet was established in service before the depot was closed to the existing Cl.332 fleet to enable HEx to continue to operate.

In total we had five Heathrow Connect trains (Class 360s) and fourteen Class 332 Heathrow Express trains to remove from Old Oak Common. That is a lot of ‘out of course’ train movements and I am really proud that all those trains left the depot without a single safety incident, which is testament to the planning and care that the teams took every time a train departed from the depot.

We planned the removal of the trains in stages. Each train had to be prepared for its journey before departure, with the first leaving the depot by road in November 2020 and the last leaving by rail on 16 February 2021, in a very emotional moment for both Heathrow Express and Siemens colleagues. Of the Class 332 Heathrow Express trains, in total twelve units were hauled by GBRf locos to Newport for recycling, one went by road to Peterborough because it couldn’t be moved by rail. A fourteenth unit was re-wrapped and taken to Goole to a new Siemens facility where it will become a permanent exhibition and classroom facility for apprentices and schoolchildren – inspiring the next generation of rail engineers.

The Class 360 Heathrow Connect trains were sold to the Rail Operations Group to be repurposed for their new parcel service. This return to parcel trains is a new and fast-growing sector removing traffic off the road, with major suppliers signing up to the service. After the last Heathrow Express train left the depot hauled by loco on 16 February, the site was formally handed over to Network Rail for the large decommissioning project to begin.

Heathrow Express cleared the last items of equipment form the depot and Network Rail finally severed the connection with the wider railway by the end of March. Replacing the old Class 332s with the smart new Class 387 fleet provides a more reliable dedicated service to Heathrow passengers, with an unrivalled 15-minute journey between central London and the UK’s hub airport. The Heathrow Express team are rightly proud of the role they played in ensuring the safe running of our passenger service, which has continued uninterrupted for key workers to get to the airport throughout the pandemic. We were able to do this as we all kept focussed on the big picture when we hit upon day-to-day obstacles or logistical issues. We formed good relationships from the start, which were based on respect and trust, and this stood us in great stead. We might have vacated the depot at Old Oak Common, but collaborative work continues with the super-hub as we are one of the many train operating companies involved in its plans for the future. 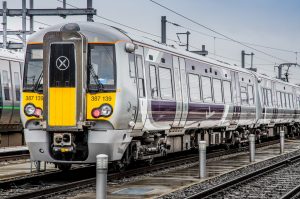