Climate change constitutes one of the greatest threats to our planet and if unchecked could result in major catastrophes leading to extreme suffering and even the total extinction of the human race. Science is now firmly pointing the finger of blame for climate change at carbon emissions. Many studies have shown that the increase in carbon in the atmosphere is causing global temperatures to rise.

Carbon emissions have grown by almost65 per cent since the 19th century and global temperatures have risen by around1.5°. This rise may not seem like much but scientists agree that a rise up to 2.2° will cause catastrophic climate destabilisation resulting in storms, floods, seasonal disruption and droughts.

On the back of this alarming evidence Governments are now taking active steps to reduce carbon emissions. The Paris Climate Agreement was signed five years ago and is an international treaty aimed at rallying the world’s nations to work together to tackle climate change. The agreement holds all nations legally accountable for their actions, or inaction, in tackling and adapting to the devastating effects of the climate crisis.

The UK Government has been the first to pass laws to reduce emissions to net zero by2050. This is one of the most ambitious in the world but is deemed necessary to head off a climate disaster.

The rail network is one of the cleanest and most energy efficient means of moving large numbers of passengers and goods. Considerable sections are electrified thus reducing the dependence on diesel powered trains. Network Rail is the first rail company in the world to set ambitious targets to limit global warming.

A significant problem with railway based emissions is that around two thirds of emissions are generated by suppliers, so Network Rail is working with with its wider supply chain to help promote climate friendly working practices. It is in this area where Torrent Trackside is playing an important role. Torrent Trackside is the leading rail plant hire company in the UK and has been supplying tools and equipment to the rail industry for over 30 years. The company has always been at the forefront of innovation and development to provide the best equipment to ensure rail projects and maintenance is carried out quickly, safely and efficiently. 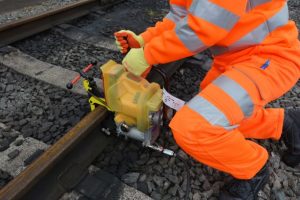 The emission free Cembre Battery Rail Drill can drill up to 25 32mm holes through standard rail on one battery charge.

A significant number of tools for rail work are powered by petrol engines. These engines generate considerable exhaust emissions thus contributing to global warming and polluting the local environment. Rail tools and supporting equipment need to be powerful and in the past fossil fuelled combustion engines were the only means of delivering that power.

This is now changing and viable alternatives to fossil fuelled tools are becoming available. Over recent years technological development of Lithium-ion batteries has seen dramatic increases in the amount of power available from rechargeable battery power packs. Battery power is transforming the way the rail industry works and Torrent Trackside is at the heart of this revolution.

The company is constantly searching for new and innovative battery products and they work closely with customers and leading industry manufacturers to help plan and tailor new equipment for rail specific operation. They now provide a comprehensive range of battery tools and lighting for many aspects of rail projects and maintenance including; rail and sleeper drills, ballast tampers, rail saws, torque wrenches, magnetic drills, stressing equipment and lighting. 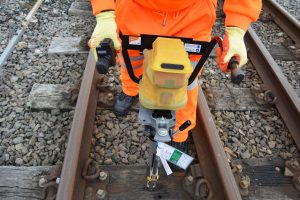 The Cembre battery sleeper drill can drill over 100 holesand has a weatherproof sleeve to allow use in rain.

Run times per battery have considerably improved enabling tools to get through a shift on one charge. Most of the battery equipment supplied comes with two batteries and quick chargers means one battery is charging while the other is in use so the tool never runs out of power.

The battery packs are completely maintenance free and can operate effectively for hundreds of recharge cycles for high output batteries and thousands of cycles for lower output models. Batteries generally can operate for many years before needing to be replaced.

The advantages of battery equipment are numerous, the absence of liquid fuel is a major benefit. Carrying heavy cans of fuel to site and the problems of mixing are a thing of the past, as are hazardous and polluting spillages and leaks.

Power is instant with battery powered tools. The operator is in complete control and energy is efficiently used as the tools do not run idle. There is also no tugging on recoil cords or waiting for the equipment to warm up before operating at full capacity. The equipment works efficiently in all temperatures so gone are the days when time is wasted on cold starts, especially during winter.

The tools have zero emissions, this is good news for the environment but also for the operators who do not have to breathe in harmful fumes and particulates. Burns from hot exhaust and engine parts are also eliminated.

The Robel Battery Ballast Tamper provides strong tampingpower with a considerable decrease in noise and HAVs.

Operating costs are not affected by fluctuating fuel prices and with the mechanics of battery tools being much simpler maintenance costs are also reduced. A petrol engine has hundreds of parts a battery motor just three. Batteries are changed in seconds and quick chargers ensure batteries can be recharged quickly, some in less than an hour.

Hand Arm Vibration (HAVS) can be a major problem with hand held tools, seriously limiting operating times proving a health hazard to operatives. The lack of a combustion engine gives battery tools considerably lower vibrations. Some of the new battery tools have over 80 per cent less vibration than the petrol equivalents. As well as reduced emissions battery powered tools are considerably quieter. Many rail projects and maintenance tasks are undertaken in residential areas and at night causing problems with residents and local authorities. Some of the new battery tools are up to ten times quieter than the petrol equivalents.

Service and logistics are also an important part of Torrent Trackside’s drive to cut emissions. Their team of dedicated rail professionals will assist in planning the most efficient equipment for projects. Smarter planning leads to reduced loads and less transport needs. The national depot network means equipment is never far from where it is required and low journey times and lighter equipment means less emissions.

Torrent Trackside also supply battery powered lighting and the range is growing all the time. Efficient batteries combined with state of the art optics and LED bulbs provide a range of lightweight, powerful and portable lighting options from hand held lamps to efficient link lights. The LED bulbs are considerably more robust than older halogen variants which need more power and are prone to failure.

Safety is at the core of the company’s business, all the battery equipment is maintained to the highest standards through a rigorous ‘in-depot’ maintenance programme and a fleet of fully equipped service vehicles manned by engineers with specialist testing facilities.

Torrent Trackside is a business built for rail and will continue to search for new ways of reducing emissions and minimising the company’s carbon footprint. Torrent Trackside will be exhibiting on stand G7 at Rail Live and all the new battery powered tools will be on display allowing visitors to learn more about them and see them in action.