As Tom Cruise hung precariously by a high-tension cable in the famous Mission Impossible ‘disc download’ scene, he was surrounded by futuristic security sensors that measured pressure, room temperature and sound. Science fiction? Perhaps not, especially if you’re responsible for ensuring safe and smooth running of some of the world’s deepest, longest rail tunnels.

The record-setting tunnels in this case are the Ceneri and Gotthard Base Tunnels in Switzerland, and recently completed, they feature state-of-the-art sensor-based control technologies that perform customized, realtime monitoring of underground tunnel and rail conditions.

In addition, a multitude of systems manage tunnel lighting, fire and smoke alarms, power supply, ventilation and emergency call systems. The role of providing communications networking, tunnel control systems, monitoring and operations support to enable such automated supervision was led by Nokia in projects over the past twelve years. In doing so, it addressed diverse challenges that ranged from physically getting equipment into the tunnel, to managing a matrix of complex system and contractual interfaces across dozens of technology suppliers, while also ensuring on-time system delivery.

Once in a century A multi-billion Swiss franc government investment, the New Railway Link through the Alps (NRLA) was launched in 1992. Now, with more than 150 kilometres of total tunnel system length including accessshafts, running hundreds of metres below ground level, the Gotthard and Ceneri Base tunnels are phenomenal feats of engineering in their own right.

Both tunnels comprise two separate tubes, each contains a singletrack set 40 metres apart from one another and connected by cross passages at intervals of around 325 metres. Creating the first flat trans-alpine rail link, this ‘once in a century’ Gotthard axis project is a huge multi-stakeholder initiative.

It involved experts in traffic lanes, overhead lines, railway safety, rail and tunnel technology, telecommunications, power supply, logistics, planning, implementation and operation. Designed and constructed by AlpTransit Gotthard AG, the tunnels are part of a plan that will give rail traffic a new, faster north-south route through the Swiss Alps.

They now enable a high-velocity link with a top speed of 250 kph, reducing travel time between Zurich and Milan by more than one hour. Thanks to the Ceneri Tunnel, the canton of Ticino also acquires an attractive urban railway system. Central to the enterprise is the government’s goal of transferring freight traffic from road to rail in order to protect the Swiss Alps ecosystem. And, under this Swiss traffic transfer policy, new tunnel construction means that the north-south rail freight corridor is more streamlined and direct that ever before.

This makes it easier to move increased volumes of freight by rail instead of road – reducing environmental impact and CO2 emissions. In fact, the pan-European Rail Freight Forward coalition estimates that moving freight by rail uses sixtimes less energy consumption than road transportation. 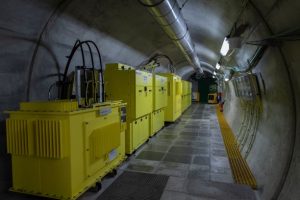 Connecting components Challenging conditions in the tunnels create intense demands on tele-communications infrastructure to deliver voice, video and data for mission-critical services at extremely high availability. The tunnel can reach high temperatures, which, when combined with dust and humidity calls for network technology capable of operating with minimal maintenance in remote and non-air-conditioned areas. Ambient temperatures in some areas can reach from -20°C to 40°C and a maximum humidity 80 per cent.

The physical challenges meant that certain highly practical measures needed to be adopted. For example, all preparation that could be completed outside the tunnel was done so. The technology in the tunnel was kept as simple as possible, and the commissioning schedule was tightly harmonized in order to eliminate problems caused by outside dependencies.

The sophisticated level of automation used in the tunnel control system is only possible with a highly reliable solution for transmitting information. Data networkbased communication plays a key role as it connects all of the sensor-based components. Data networking is the central communications element and is composed of a fully redundant IP/MPLS (Multiprotocol Label Switching) network for each tunnel.

The system must be able to transmit all kind of mission-critical data, which are transmitted by radio for railway-related issues such as operations and intervention during maintenance or, in the event of a train or infrastructure incident. Operational communications are based on VoIP services for emergency phones, standard phones in the buildings, and public address in service and escape tunnels.

These transmissions are carried out using the GSM-Railway standard. Other wireless technologies deployed include 3G/4G and Professional Mobile Radio. To serve these multiple requirements, a so-called ‘radiating cable’ was installed as a medium for transmitting wireless signals. The cable also allows passengers to access mobile networks, make calls and use the Internet while traveling through the tunnel. Up and running now in daily use, an ‘expert system’ sorts out the most relevant mission-critical telecommunication alarms for the tunnel control system. Nokia’s operations support system identifies, consolidates and correlates a constant stream of events, based on approximately two thousand network components throughout the telecommunications infrastructure of both Ceneri and Gotthard base tunnels. 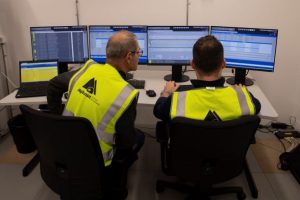 It also performs monitoring and root cause analysis for rail-related services. To do so, it integrates network components from several third-party technology providers, including data networks, a video surveillance system, two tunnel radios and two emergency communication systems. It handles subsystem interfaces across various protocols as well as information exchange with existing fault management systems on SBB infrastructure.

Via fibre optic cables, the tunnel control system provides the intelligence required by the Pollegio operations centre. It enables real-time insights to be delivered across a range of parameters and identifies alarms for intervention and error handling – which are absolutely vital to tunnel safety, security and smooth running. Close vigilance on tunnel conditions is maintained by a team of tunnel specialists, who keep a watchful eye on all the infrastructure in and around the tunnels.

With Ceneri Base Tunnel officially handed over in September 2020, this now completes this latest phase of Nokia’s work– having completed initial projects on the Gotthard Tunnel in 2016. Without doubt, the opportunity to contribute to this unique project has thrown up new types of testing challenges, but along the way all targets and deadlines were met well in advance. Thankfully however, the automated monitoring system has not had to respond to anything like the somewhat incredible Eurotunnel chase scene at the close of that same Mission Impossible movie. Filmed partly in Scotland, the main cutting-edge technology in that scene’s filming was – for the record – just blue screen. Daniel Klaus is Customer Project Manager and Raoul Harlacher is General Project Manager at Nokia.