How logistics is unlocking the true potential of rail freight

Robin Woodbridge, Head of Capital Deployment at Prologis UK, explains why he is bullish on the rail freight sector

The performance of the UK logistics sector has been one of the more positive stories to come out of the pandemic, having demonstrated its crucial role in maintaining the flow of consumer goods at a time of significant disruption and heightened demand.

Logistics is all about having the right solutions in place to get things where they need to be at the right time. While rail freight is often overlooked, it’s there in the background delivering goods on the tracks and is becoming one of the most important modes of transport for businesses, large and small. In the last twelve months, alongside its normal levels of activity, rail freight has run longer trains and carried new flows of PPE and other essential items to ensure demand is met.

In the minds of many, both in the logistics sector and wider public consciousness, rail freight is still equated with, dusty, dirty coal trains, which were formerly a familiar sight on the UK’s railways. However, that couldn’t be further from the truth now. With trains used to move a wide variety of goods the length and breadth of the country, including flatpack furniture, perishable grocery items, building materials, automotive components, and parcels.

While moving goods by road remains the most popular mode of freight transportation in the UK, rail is poised to play a much bigger role in coming years. Recent research shows that the volume of freight moved by rail in the UK is set to grow by three per cent year-on-year. Even before the pandemic, Network Rail forecasts from 2013 predicted that the UK’s intermodal freight sector would grow exponentially, with rail’s share of the road and rail market increasing from 19 per cent to 46 per cent by 2043. This is likely to increase as networks in the UK and EU become even more far-reaching and comprehensive. 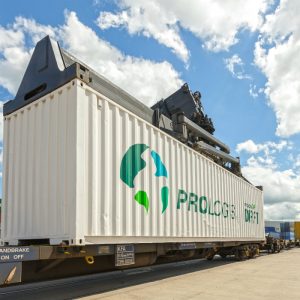 Rail freight is an excellent performer in terms of reliability, too. In Q2 2020, during the height of the pandemic, the proportion of freight trains arriving within 15 minutes of their scheduled arrival time, according to the Freight Delivery Metric, reached a high of 95.4 per cent, according to official ORR statistics. In comparison to road performance, where disruption on the motorway or other trunk roads is common, rail is significantly more reliable.

Of course, having track and signalling infrastructure in place to support growing demand for rail freight operations is just one piece of the jigsaw. For companies to successfully move goods across long distances, and deliver them to customers within tight timeframes, it’s important to ensure there is sufficient logistics warehousing and distribution property in the right places too. One example of a leading rail-served logistics scheme in the UK is Daventry International Rail Freight Interchange (DIRFT), located in Northamptonshire.

Developed by Prologis, DIRFT is the UK’s most important intermodal logistics park with three operational rail terminals, alongside rail-served warehousing – which will provide 14 million sq ft of logistics space, once complete. Over the past decade, rail freight services using DIRFT’s terminals have increased steadily and today, the equivalent of over 200,000 containers arrive and leave the site every year. In addition to domestic services, the common user terminal operated by Malcolm Rail also handles European trains, which continue to operate well, despite recent border changes.

Location is crucial for logistics and, whilst the UK has a well-established national rail network, it’s important to ensure key logistics infrastructure is located in areas of the country that benefit from good access, close to major transport hubs. Situated in the logistics ‘golden triangle’, DIRFT is close to the M1 motorway and has a direct connection to the Northampton loop of the West Coast Main Line, providing rail access to the South East ports, and up the spine of the country to Scotland. Delivery drivers leaving DIRFT can reach 95 per cent of the country in under four-and-a-half hours, the maximum time they can legally drive without taking a break. Importantly, the site has been designed to act as a regional hub for rail freight flows to and from the port of Felixstowe and the Channel Tunnel, which is a key part of the Trans-European Combined Freight Network.

For example, a full load order placed at 14:00 in Glasgow can be picked and packed at DIRFT and delivered back to the regional hub or store in Glasgow by rail, arriving at 06:00; an order-to-delivery window of less than 18 hours.

With household names such as Tesco and Sainsbury’s operating their own rail terminals and distribution operations at DIRFT, it’s easy to understand why the site has played such a significant role during the pandemic. During the first lockdown, freight was prioritised over passenger traffic for the first time on the West Coast Main Line, underlining its importance in protecting the movement of goods at this incredibly challenging time. 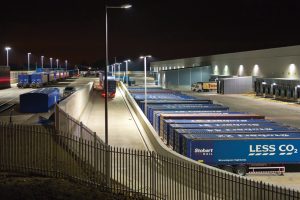 Reducing costs and carbon through collaboration

Rail freight users on DIRFT become part of a rail freight working group who exchange ideas, share best practice and collaborate to reduce both operational costs and carbon emissions. Tesco and Sainsburys, for example, regularly collaborate to share space on the freight trains passing through DIRFT, helping them reduce both their costs and the environmental impact of their operations.

Tesco is now the biggest retail user of rail in the UK and is so convinced of its benefits that it recently launched a new £5 million investment programme at Prologis DIRFT. This supports its plans to transfer a greater proportion of its distribution network away from road and on to the rail network.

Tesco’s increased rail service is set to replace 40 truckloads of road freight between Daventry and Middlesbrough per day. It will eventually save more than 5,000 tonnes of CO2 each year and remove over 3.9 million truck miles from the road, helping Tesco meet its ambitious carbon reduction targets.

Another major infrastructure project is also currently underway, funded by Prologis, promising to triple rail freight capacity at DIRFT. Works include the construction of a brand-new rail freight terminal and associated road access points to the site.

Royal Mail is another company seeking to benefit from rail connectivity at DIRFT. Prologis is currently building the parcel delivery company’s largest UK parcel hub on site. The 840,000 sq ft building will be the size of over ten football pitches, with capacity to process over 1 million parcels per day. It will also include a dedicated rail platform and direct access to the new, state-of-the-art rail terminal, currently under construction.

The new terminal will feature a bespoke rail traverser outside the terminal building, at the end of nine kilometres of new lines. The traverser will be used to move Class 66 locomotives in a perpendicular direction to the tracks, so they can return to service after loading/unloading. This has allowed the terminal length to be shorter, as a head shunt isn’t required. It spans 28 metres, has a capacity of 140 tonnes and comprises an access platform, plus loco buffer to prevent trains overrunning.

Following a surge of interest in rail freight during the pandemic, now is the time for the UK to fully embrace it as part of its logistics ecosystem. The synergies and sustainability benefits provided, combined with excellent access to other parts of the network and warehousing options, make rail freight the right choice for businesses looking to build resilient, sustainable supply chains.

Robin Woodbridge is Head of Capital Deployment at Prologis UK